You are here: Home / National News / George W. Bush Has Written a Biography of his Father 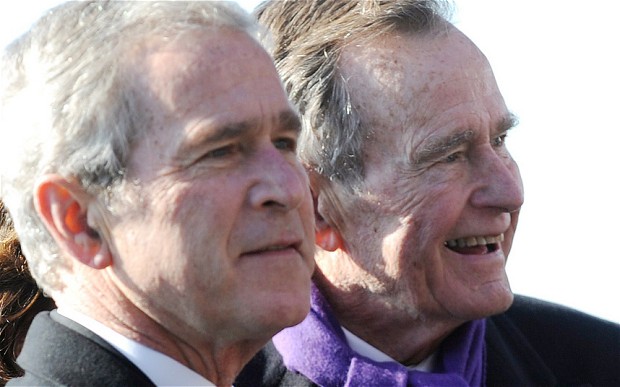 Former President George W. Bush has many other skills besides painting, as he has written a biography of another member of the famous Bush family – his father, George H.W. Bush, 90. According to the Crown Publishing Group, the book will be released in the US and Canada in print and digital formats on November 11. The hardcover edition has an announced first printing of one million copies.

Back in 2010, Crown also published George W. Bush’s million-selling memoir, Decision Points, a memoir focused on the most consequential decisions in his personal and political life. Howeverthis next book is currently untitled. “George H.W. Bush is a great servant, statesman, and father,” George W. Bush said in a statement issued by Crown. “I loved writing the story of his life, and I hope others enjoy reading it.”

According to Crown, the book will cover the elder Bush’s whole life as well as his influence on his son, from George W.’s “childhood in West Texas to his early campaign trips with his father, and from his decision to go into politics to his own two-term Presidency.” This book, written entirely by George W., gets to the entire scope of the elder President Bush’s life and career, including his service in the Pacific during World War II, his pioneering work in the Texas oil business, and his political rise as a Congressman, U.S. Representative to China and the United Nations, CIA Director, Vice President, and President.

Financial terms were not disclosed, but George W. Bush is represented by Washington attorney Robert Barnett, who also took care of negotiations for Decision Points.

Crown publisher Maya Mavjee said in a statement that the book is “heartfelt, intimate, and illuminating (…) As the only father and son to each have served as President of the United States since John and John Quincy Adams, George H. W. Bush and George W. Bush occupy a unique position in history.”

This is not the first time Bush senior has been under cultural spotlight. In 2012, he was the subject of an HBO documentary, 41, referring to his being the 41st president. Moreover, Jon Meacham, a Pulitzer Prize-winning biographer, is currently working on a book about Bush: George H. W. Bush: Character at the Core, is scheduled to come out this fall as well.

The elder Bush celebrated his 90th birthday on June 12 by, once again, jumping out of an airplane. Just as he did for his 80th and 85th birthdays, Bush marked the end of his ninth decade with one last parachute jump.