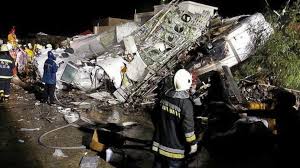 After the Taiwanese aircraft crashed in the torrential rain killing 48 people that were on board, authorities were being accused by angry relatives of having permitted one of the worst air disasters in a decade.

Rescuers managed to recover the black boxes on Thursday, and this provides hope that authorities will be able to explain what happened with the TransAsia Airways aircraft. As black boxes record cockpit voices as well as other relevant flight data, experts could answer the questions that concern the crash of the domestic flight that crashed in Magong.

According to officials, the plane had been carrying 54 passengers and four other crew members. Out of the people on board, only 10 survived the crash of the ATR 72-500 propeller plane. As it crashed, the aircraft damaged ten houses in Magong. The plane was flying from Kaohsiung (southwestern Taiwan) and as it crashed, it also injured five people on the ground.

Flight GE222 was attempting its second forced landing after having attempted to land during heavy rain and thunder in the Typhoon Matmo that was pouring over Taiwan. Currently, investigators can’t explain why the aircraft had been cleared to fly in such bad weather and are trying to establish the cause of the crash.

Several relatives of passengers that were on board discussed the conditions in which the plane had been flying. The father of a 28 year old that was killed in the crash said that the plane should have never received clearance to fly in such bad weather. The daughter of Lee Yi-Iiang (one of the pilots flying the plane) also shared the same concerns. According to her, the weather was so terrible that the plane shouldn’t have taken off. Her father, Lee Yi-Iiang also lost his life during the crash.

Taiwan minister of transport, Yeh Kuang-shih declared that the meteorology data fitted aviation safety requirements and as such, an aircraft could be cleared for takeoff.

One hundred rescuers worked together to remove the bodies as well as the debris from the crash site with the help of a crane. A religious ceremony was also held at the crash sites, according to officials, to appease the spirits of the victims.