You are here: Home / National News / Al-Shabaab Raids Kill Over 29 Innocents near the Kenyan Coast

Gunmen from Al-Shabaab murdered 29 people in two raids near the Kenyan coast on Saturday. A tourist was also shot dead further to the south. As the region’s lack of security is becoming a concern, the government is struggling to keep the situation under control. On Saturday, a group equipped with assault rifles raided two towns. They broke into a police station to release the men held there for questioning. The detained men were linked to the terror strikes near Mpeketoni town, from June 15, when 73 people were killed during three raids. 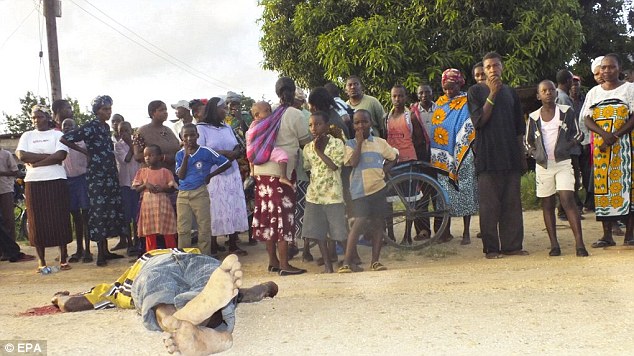 This time, the raids weren’t in the tourist destination of Lamu Island. They were targeted to the towns of Hindi (extremely close to Mpeketoni) and Gamba. The raid group attacked a police station in Gamba. One police officer and 9 other bystanders were killed. The bloodstains still mark the entrance to the police station.

A witness claimed that this raid was extremely similar to other attacks. A group of armed gunmen appeared and walked casually while shooting civilians on their way. They then broke into houses, killed the home-owners for no reason, and moved further. At least 13 other people died in Hindi. Njenga Miiri, commissioner to the Lamu County declared that 15 armed men raided Hindi and started shooting at the residents randomly. He also said that several buildings were burnt (including a church).

Al-Qaida-linked Al-Shabaab militants from Somalia took responsibility for the attacks. They also took responsibility for last month’s raids from Mpeketoni. However, Kenya police believes that a separatist group on the coast is responsible for this weekend’s raids. It seems that a protest rally planned on Monday in Nairobi by the opposition has stirred the spirits. In this rally matters of corruption, security disbandment of electoral authority and living conditions will be discussed. Authorities believe that these protests will only deepen the problems between different factions and lead to more problems.

The list of victims includes five non-Muslim inmates. In addition to this, three inmates escaped with the gunmen. Grace Kaindi, deputy inspector general of police strongly believes that the separatist group Mombasa Republican Council is responsible for the raids, due to a message left by the group after the raids. They asked Muslims to rise up, strike back, reclaim their home and get rid of Christians from the coast. The group also supports minister Raila Odinga.

Much of the tension, and the increase in attacks since the deployment of troops to fight Al-Shabaab militants is probably due to the accusations made by supporters of opposite political beliefs. Kenyatta claims that the attack on Mpeketoni was politically motivated, as an indirect attack on Odinga. Odinga lost to Kenyatta in last year’s vote, but he continues to protest and will probably also be present at Monday’s rally, where 15.000 police officers will be deployed.