You are here: Home / National News / US Economy Posts Dramatic Drop for 1st Quarter of 2014 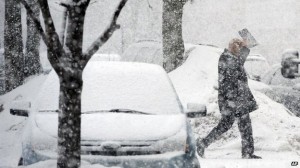 The first quarter of 2014 saw the U.S. economy shrink by the largest margin since the peak of the global financial crisis. This contraction of the economy came against the backdrop of consumer spending receding after the holidays. The United States’ gross domestic product also posted a drop, down by 2.9 per cent at an annually adjusted rate. This drop is bigger than the one predicted by financial analysts and it’s the largest one since the same period in 2009. The final quarter of 2013 had only seen a 1 per cent drop, according to data reported on Wednesday in Washington by the U.S. Commerce Department.

This recently posted drop of the U.S. economy also marks a historic occasion, albeit one that is less than positive. It’s the biggest downward revision from the second GDP estimate released by the Commerce Department since 1976. According to the experts, the national expenditure in the field of healthcare was lower than initially expected and brought on the overall slowdown of the economy.

Though the current picture of the U.S. economy may appear grim, judging by the above cited data alone, several experts indicate that the situation is not really that dire. For one thing, USB Securities LLC New York economist Sam Coffin told Bloomberg that it’s relatively natural to witness a slump during the first quarter of the year. The “fundamentals” of the U.S. economy are not entirely reflected by the decrease of the GDP, Coffin explained. He’s got the credentials to make such affirmations, says Bloomberg, who has named Coffin the best forecaster of the evolution of the U.S. GDP over the past two years.

Coffin and Bloomberg alike expect to see the economy picking up again in the second quarter, as the weather improves and consumers and companies alike increased their spending. The setbacks experienced by the economy during the first quarter are expected to be strictly temporary, as warmer weather means more car purchases and store purchases in general, as well as an increased number of equipment and manufacturing orders from commercial agents. It’s also important to bear in mind that the U.S. saw a very long, heavy winter, which clearly took its toll on the economy. To boot, job gains are also in the cards for the second quarter of 2013. This, in turn, might confirm the views professed by Federal Reserve policy makers, who say the U.S. economy is actually on the up and up and doesn’t need as much monetary stimulus as it may seem to.