Mike Barker, a West Iron County High School student, had to struggle hard when he decided to wear a pink mohawk to honor his mother Wendy Pawlicki, who is a breast cancer patient, and her fight against the disease.

After finding out that his mom had breast cancer, Barker decided to have a pink Mohawk but this decision was not easy for me. He was banned from competing in his school’s track meet just because his pink Mohawk failed to suffice his school dress code

Barker told FoxNews.com that his coach and the school principal told him his “new hair style did not meet the school’s grooming and appearance policy.” 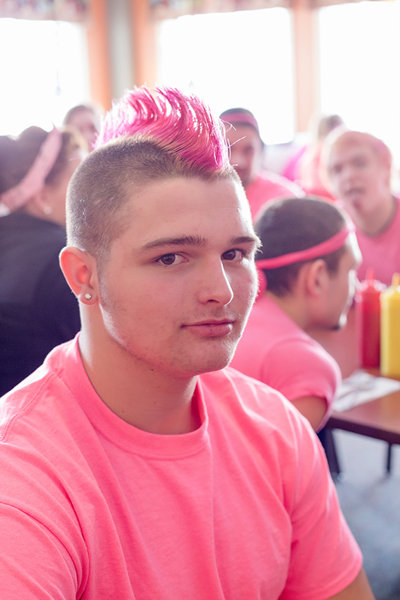 “My coach told me I can’t have pink hair with Mohawk to support my mom with breast cancer. But I want this to change. That’s my goal.” said Barker.

According to ForwardProgressives, the West Iron County School District’s dress code prohibits fashion statements that are seen as a distraction.

Barker said that the school told him to go back in the office and get it cut off.  “I told them no, they told me ‘well you can’t run then’, then I told them I quit,” he said.

Proud mother Pawlicki said that her son had been to practice with the mohawk for weeks and it was only when he dyed it pink that they would not allow him to compete in his sport.

Barker and his mother Pawlicki has received tremendous support from his school mates and neighboring towns. More and more people of the neighboring areas have shown their support by wearing pink and dying their hair pink.

Meanwhile, a Facebook group with over 1,500 members from across the country has also supported Barker’s cause.

Expressing his gratitude, Barker said, “I want to thank all those people who are supporting me and sharing the love.”