Sen. Mike Lee (R-Utah) will be giving the Tea Party Express’ fourth annual tea party response from the National Press Club after President Barack Obama gives his annual State of the Union address to the Congress.

According to the Tea Party Express, Obama will be delivering the State of the Union address on January 28. The Senator is expected to speak following the official Republican reaction, sources said. Meanwhile, Republicans have not made it clear that who will deliver their response.

Hailing the contribution of Sen. Lee, TPX Chairwoman Amy Kremer said in an official statement, “He has been a tea party hero for supporters round the nation and a leader of conservative in the upper chamber. He has given concrete policy solutions to some of the biggest problems that the US is facing.” 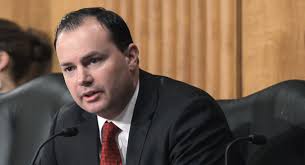 Lee’s response is expected to be covered by some of the leading networks after Obama’s address and the Republican response. Last year’s tea party response was carried by the CNN. It is noteworthy, Lee’s remarks will also be streamed online. Past speakers include Rep. Michele Bachmann (R-Minn.) and Sen. Rand Paul (R-Ky.).

An umbrella group for the conservative movement believes it would be a good opportunity for them to bring conservative ideas infront of the Americans, which they believe will help them to prosper.