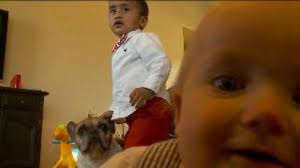 SANTAQUIN, Utah – Lady Luck seemed to bless a Utah family in her own way. The Utah family who was completely disheartened because of the inability to have children of their own, had a complete revival when they became pregnant and then adopted a family friend’s child. The whole revival took place within a few months.

The couple said it wasn’t a road they anticipated to travel.

“We went from having no kids to two kids within about a two month period, which is kind of a life changer, turned our life upside down,” said Andrew Elston.

Andrew and Sarah Elton were facing fertility issues for a long time so they began looking into adoption. That’s when Sarah discovered about her pregnancy, and soon one member was added in the family-thanks to adoption.

“We were approached by a family friend who asked us if we wanted to adopt her baby, and I was eight months pregnant at the time, so it wasn’t something we were planning on, but we said yes,” Sarah Elton said. “The next day we actually went and got him.”

The two boys, Mason and Riley, have only five months age difference, making it easy for them to blend with each other.

“They love each other,” Sarah Elton said. “They’re best friends. They play for hours, hours and hours every day.”

The Eltons showed their willingness to adopt in the future also.