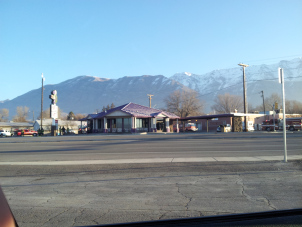 PLEASANT GROVE: Fire crews took action to save an iconic restaurant in Pleasant Grove, Saturday morning when a fire broke out in the restaurant.

The fire was perceived when a passerby noticed smoke coming from the building.

The fire damaged the drive up and the two bathrooms and the building was also throughout smoke damaged, said the restaurant owner.

The owner looks forward to make the business normal and running again by mid next week.

The Purple Turtle has become a landmark in the Pleasant Grove community since its opening in 1969. It is well-known for its burgers and shakes.

Pleasant Grove Fire Capt. Brian Patten said that the reason of the fire is being ruled uncertain, but accidental, at this point.

“It was not arson, vandalism or intentionally started,” he said. “There was a wall unit on that wall, but the amount of fire damage in that wall burned up a lot of the evidence as to what caused it.”

“It was an extended operation because of the nature of the building,” he said. “We had to make sure the fire was completely out, which it was.”

According to Patten, the damage is estimated to be at around $35,000, but no one has been found suffering any injury.