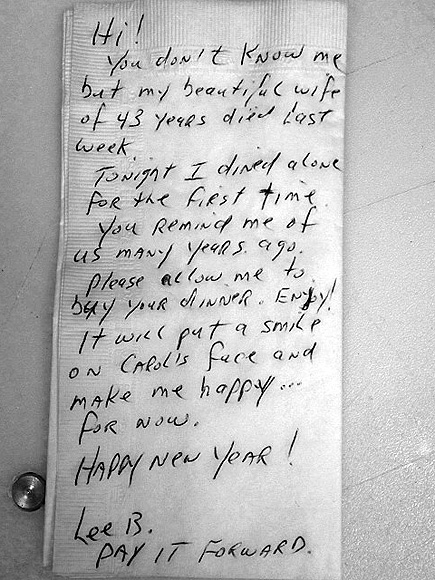 While dining alone at Cicco’s, an Italian restaurant in Barrie, Ontario, a Canadian man did something that would have made his wife proud, if she would have been alive.

Lee Ballantyne, 65, was alone at the restaurant for the first time since his wife Carol, 43,  passed away on December 30th . Ballantyne was watching the couple next to him remembering Carol, so he decided to do something for them.

Ballantyne left a note for the couple, saying: “Tonight I dined alone for the first time. You remind me of us many years ago. Please allow me to buy your dinner. Enjoy!” It will put a smile on Carol’s face and make me happy… for now.”

A friend of the waitress, who helped Ballantyne convey the note, snapped a picture of the heartwarming note from the widower explaining his act and posted on the social sharing site, Reddit .

When the photo was posted, it went viral, swirling the emotions in people all over the world. The caption says: “A friend had a customer leave this to the couple next to him tonight, and pay for their meal.”

Ballantyne wished the couple a Happy New Year and ended the note by asking them to pay it forward.

“I just wanted to write what I felt at the time, so I scrawled it on a napkin,” he said.

The Cicco’s owner Lindsay Weiss said the reaction was emotional for everyone. “The couple was beyond touched and grateful. I cried. The waitress and chef cried. It was one of the kindest gestures I’ve ever witnessed,” Weiss said.

Ballantyne got a gratitude call from the couple. The couple expressed their condolences, and showed their willingness to take Ballantyne to dinner in the near future. 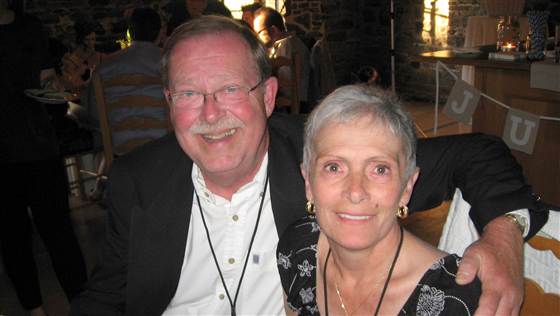 Carol suffered from numerous fatal diseases. She was diagnosed with lupus and fibromyalgia five years ago, and suffered from chronic bowel obstructive disease. In October, while suffering from lung cancer, she chose to undergo chemotherapy treatments but her immune system was too weak to handle the treatments.

Ballantyne met Carol in high school, and the two were married in 1970. Lee and Carol had three sons and five grandchildren.

“Even in his time of sadness, he does something so kind,” A commenter on Reedit wrote. “Bless you, Lee. Carol must be so proud of you. God Bless.”