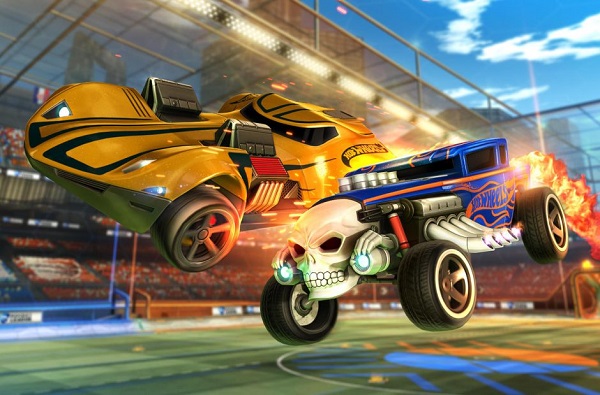 Ever since its launch, Rocket League has seen immense success and popularity with hardcore and casual gamers alike. Its combination of easy to start, hard to master gameplay has appealed to a lot of people and has even lead to the start of a professional esports competition.  The game was also able to thrive thanks to the continued support from its developers with various free or paid DLC.

The latest update for Rocket League will have a lot of nostalgia for some of the older gamers who enjoyed playing with cars when they were kids. The Hot Wheels DLC will see the inclusion of some of the most popular toy cars into the game.

The new DLC for Rocket League will be available starting on February 21 and will add the Twin Mill III and the Bone Shaker, with more cars expected to come in the future, depending on the success of the DLC. Both of the two cars will have a various Hot Wheels customization decals.

Players will also be able to earn the various decals and other customization options specific to Hot Wheels even if they will not purchase the DLC. Psyonix will also add some free Hot Wheels content such as the Treasure Hunt flag, Shark Bite topper, as well as the Hot Wheels antenna and topper.

While all the playable cars in the game are original, at least they were before this new Hot Wheels DLC, the company also expressed interest in adding licensed cars to their popular game such as the Batmobile or the DeLorean time machine.

In addition to the game content, Rocket League is also launching its first official line of physical toys in the form of the mini ‘pull-back’ racers in the coming spring. The new line of toys was developed in partnership with Zag Toys and includes 12 Rocket League vehicles, sold in their own Rocket Ball. Furthermore, some cars will feature an in-game redeemable code for a special Rocket Trail and wheels.

The toys will be sold in blind bags, which means bad news for collectors or those who want to have all the cars as fast as possible. They will have to either purchase more bags or switch duplicates with friends.