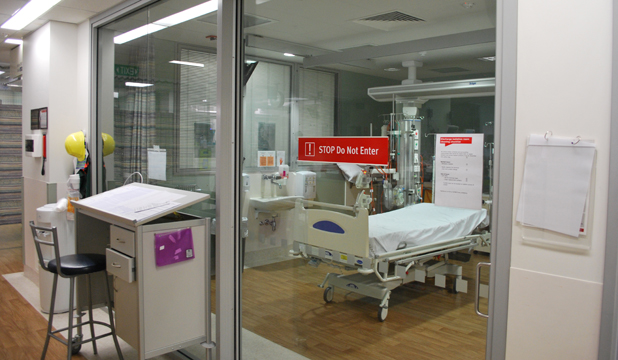 According to U.S. health officials’ statements on Tuesday, the first case of Ebola in the United States had been diagnosed, showing that the deadly outbreak in West Africa has the potential of spreading globally.

The patient is currently in the Texas Health Presbyterian Hospital in Dallas, in isolation. He has recently traveled to West Africa but it was only a few days after returning to Texas that he first developed symptoms.

The patient’s diagnosis was confirmed by the Centers for Disease Control and Prevention and marks the feared outcome of an ever-growing outbreak. U.S. health officials have been bracing themselves for the day when an infected patient would arrive in the United States undetected.

The CDC assured the public that it had already began working together with the Texas Department of State Health Services to investigate the case and to make sure that the transmission of the disease does not occur.

“The hospital has implemented infection control measures to help ensure the safety of patients and staff,”

Several patients diagnosed with Ebola have already been treated on U.S. soil, but those patients had been diagnosed with the deadly disease in West Africa. They were either medical or aid workers who had contracted the virus when working with patients in West-African countries.

CDC Director Dr. Thomas Frieden insisted that United States hospitals are well equipped to handle patients with the deadly hemorrhagic fever. He also assured the public that, as opposed to West Africa, the public doesn’t pose the same threat in the United States. There is, however, the question about medical waste and whether hospitals are equipped to properly dispose of Ebola contaminated trash.

The virus has already claimed the lives of over 3,000 people in West Africa since the outbreak began. Biotechnology companies have been working around the clock to come up with Ebola therapies and vaccines and stocks in these companies have been rising as news of the U.S. Ebola patient was made public.