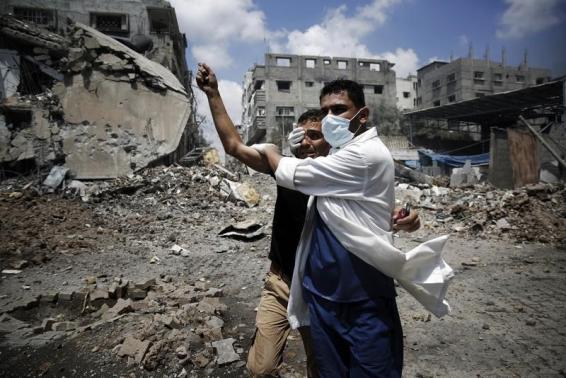 According to Hama’s armed wing, an Israeli soldier has been captured on Sunday, under the circumstances that the fighting that has been taking place here has already caused the death of 100 Palestinians and 13 Israeli soldiers.

The capture was made public on the Hamas television broadcast and as such, Israeli military will have to verify the information. The masked spokesman of the Hamas armed wing only announced the capture without actually offering palpable evidence that the soldier was actually in their custody.

Abu Ubaida, the masked spokesman, affirmed that the capture had taken place on Sunday, during the battle where 13 Israeli soldiers had been killed. Sunday was also the day when death tolls reached an all-time high since 2006, as the most Palestinians were killed on this day as opposed to any other since the fighting began.

The captured soldier was identified by Abu Ubaida as Saul Aron (the Hamas spokesman also recited the soldier’s identity tag number). He would be the first soldier that has been held captive by Hamas since 2011. Back then, Israel decided to release around 1,000 Palestinian prisoners in exchange for the release of Gilad Shalit, the soldier who was held captive for over five years.

Mahmoud Abbas, the Palestinian President, declared a three day mourning period and accused Israel of creating a massacre in Shejaia.

Among the killed Palestinians, 17 were children, 14 were women and 4 were elderly. A total of 400 people were injured during the Israeli assault.

As the situation continues to escalate, U.S. President Barack Obama contacted Israeli Prime Minister Benjamin Netanyahu for the second time in three days to raise his concerns about the ever increasing number of casualties that the conflict is creating on both sides. The Israeli Prime Minister pledged his efforts to restore the peace and quiet and went on to say that the operations will continue for as long as necessary.

On Monday, John Kerry (U.S. Secretary of State) will be traveling to Cairo to discuss the crisis with Egyptian officials. The United States is deeply concerned with the entire situation (Jen Psaki, U.S. Department Spokeswoman said) as the risk of escalations is uncertain. She went on to say that the U.S. greatly desires a ceasefire.

However, John Kerry also stated that the U.S. will continue to support the right of self-defense that Israel has against rocket raids that are not ceasing to arrive.