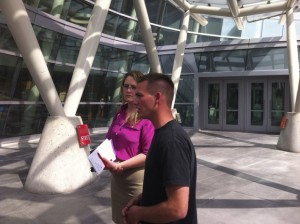 A man in Salt Lake City, Utah, whose dog was shot in his own backyard by a police officer last week is now demanding that the officer in question be fired from the force. On Monday, Sean Kendall, the 27 year-old former owner of Weimaraner Geist, met up with police representatives to address the incident. The dog was shot in the head last Wednesday, during a search of houses in the area, for a missing three year-old boy. The boy had been reported missing by his parents, who live in the 2500 South and Fillmore Street area. Police were finally able to find the boy, asleep in the basement of his own house.

Kendall reported that the meeting with police representatives was satisfactory, but that he was still feeling “extremely frustrated and upset” over the death of his dog. Though he qualified the meeting as “productive” he expressed distress over the police representatives’ reluctance to take measures against the officer responsible for the firing the shot. Kendall also added he would only be satisfied with the termination of the officer in question: “I feel that his judgment was completely inappropriate”. In the meantime, the officer in question is still actively on duty, while his department is conducting an internal investigation regarding the incident last Wednesday.

As of the time this article was written, the dog’s owner did not state whether or not he would be pressing charges against the police department. However, he has expressed his belief that his rights were violated by the officer who trespassed on his property and then shot the dog. Brett Boulton, the dog owner’s lawyer, also added that he believes his client ought to be financially compensated for his loss. He did not mention a specific amount of money to this end. Boulton explained that the legal system pays “people money when bad things happen”.

On the other hand, police representative Sgt. Greg Wilking said there was nothing illegal about the officer’s decision to enter Mr. Kendall’s property through his backyard. Wilking added that the officer in question had all the extenuating circumstances he needed, in order to take such a decision. “A child is missing, and if you’re a parent, you would want us to look everywhere for your child. We wouldn’t want to leave any stone unturned.” On the other hand, Wilking refused to comment on the officer’s decision to fire his weapon against the dog. He stated: “The officer did what he did in the moment to avoid being bitten, possibly”.