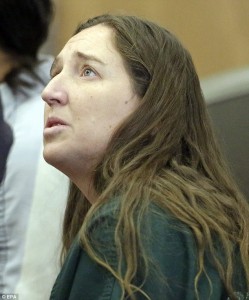 Utahan Megan Huntsman, currently under investigation by local authorities for the alleged murder of her six newborn babies, has been identified by Salt Lake City police as a possible methamphetamine addict. The woman, who is now 39 years old, is also believed to be addicted to other drugs and illegal substances. According to a press statement made by Capt. Mike Roberts of the Pleasant Grove Police to Associated Press, the authorities have enough reasons to believe that these addictions were the determining factor behind the multiple murder.

This is the first motive that Pleasant Grove police are bringing before the media, to explain the horrendous chain of murders. Between 1996 and 2008 at least six babies were strangled or suffocated to death. During that period, Ms. Huntsman was probably addicted to meth. At the moment, she is imprisoned, with six counts of first degree murder to her name, and there’s a $6 million bail pending in her case. A seventh baby has been discovered in the family’s garage, but the authorities believe that it was stillborn and not murdered like the others.

The police made the above cited statements on Tuesday and Ms. Huntsman’s attorneys were not available for responses or comments at the time. On the same day, police confirmed the paternity of the seven deceased babies, found in the garage of a Utah home. According to the results of several DNA tests, the babies’ father is the woman’s estranged husband, Darren West. During the eight years when the murders took place, West lived with Ms. Huntsman. From 2006 to January 2014, West served a jail sentence of his own for drug charges, in a federal prison. West was also the person who found the first body, on April 12, during a routine clean out of the home’s garage. He went straight to the police and told them he had found the corpse in a small white box, which had been covered with insulating duct tape.

The police then got a search warrant for Ms. Huntsman’s home and found the other six bodies. According to police records, all the bodies were found wrapped in fabric items, such as shirts or towels, and packed in individual boxes inside the garage. The question remains of how it was possible for West to remain oblivious to the alleged murders. Yet the police say he is not a suspect in this case, whose sole suspect is actually Ms. Huntsman. The investigation of the murders is still open as of this writing and Megan Huntsman has yet to enter a plea in her case.