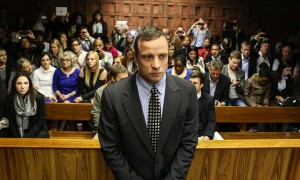 The trial of Olympic and Paralympic South African athlete kept the headlines this spring, as he admitted to shooting his girlfriend model Reeva Steenkamp in his home in February 2013.

To resume the facts, the athlete and his girlfriend were in a Pretoria suburb last year when Oscar Pistorius shot her through a closed toilet door four times. His defense revolved around the “accident” idea: the star sprinter and tracker admitted he shot through the door, but he said he mistook his girlfriend for an intruder hiding in his bathroom.

The trial began in March this year but the court asked for a psychiatric evaluation in order to see if Mr. Pistorius was mentally responsible for his acts. In other words, a team of psychologists and psychiatrists assembled to see if Oscar Pistorius was able to determine right from wrong at the moment of the crime.

This mental health testing came after a witness (a psychiatrist actually) stated that the athlete was consumed with a severe state of anxiety for his entire life. Moreover, he was obsessed with his own insecurity and safety. Given these allegations, the court ordered the athlete to report for an extended, one month long psychiatric assessment.

The trial resumed on Monday and the expert panel’s conclusions are so far against the defendant: Oscar Pistorius was found mentally responsible and thus able to discern right from wrong. If he would have been found criminally irresponsible and mentally impaired, the trial would have stopped and the accused found “not guilty” due to mental illness. However, this is not the case:

At the time of the alleged offenses, the accused did not suffer from a mental disorder or mental defect that affected his ability to distinguish between the rightful or wrongful nature of his deeds, prosecutor Gerrie Nel read from a report submitted to the court.

There is little to do in this case, now that both the defense lawyers and the prosecution admitted the psychiatric evaluation as valid. This evaluation is a very hard edifice to demolish, as psychological impairments were ruled out. The trial is said to be over sometimes this week, as the defense has very few witnessed to bring up to the stand. Now that Oscar Pistorius was found mentally responsible in the night of his girlfriend’s murder, the defense has no other ace to play but insisting on the defendant’s position of self – defense and murder by accident.

If Oscar Pistorious is found guilty by the judge, he will face the sentence of 15 years in prison or even life in prison. If the judge believes the defense’s position of Pistorius accidentally killing his girlfriend as he mistook her for an intruder, he could get a culpable homicide verdict, with the sentence at the discretion of the judge.