A new study has found that the ancient shrimps had the earliest cardiovascular system.

According to the study, the shrimps had the oldest known cardiovascular system that was 520 millions years ago.

The discovery was made following the study of a pristine fossil of the shrimp’s heart and blood vessels. The fossil was found in the Yunnan Province southwestern China. According to the scientist, it dates back to a period when the Cambrian Explosion marked the expansion of a vast majority of the species on Earth.

The team named the arthropod Fuxianhuia protensa and determined the invertebrate would be a relative of crabs, lobsters and shrimp. 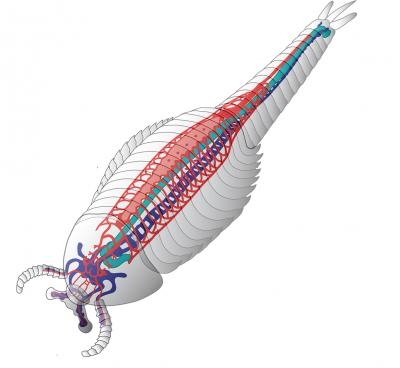 Study researcher Xiaoya Ma said, “It is an extremely rare and unusual case that such a delicate organ system can be preserved in one of the oldest fossils and in exquisite detail. However, under very exceptionally circumstances, soft tissue and anatomical organ systems can also be preserved in fossils.”

Ma is a paleontologist at the Natural History Museum in London.

Nicholas Strausfeld, director at the University of Arizona Center for Insect Science, said that the arthropod is relatively abundant, but only extremely few specimens provide evidence of even a small part of an organ system.

“The animal looks simple, but its internal organization is quite elaborate. For example, the brain received many arteries, a pattern that appears very much like a modern crustacean,” Strausfeld said.

During the study of the fossil, the researchers found a tubular heart in the middle of the creature’s body and vessels connecting it to its eyes, antennae, brain and legs.

“This is another remarkable example of the preservation of an organ system that nobody would have thought could become fossilized,” Strausfeld said.

The research findings were published in the journal Nature Communications.