You are here: Home / Archives for tuition bill 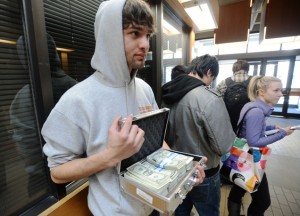 SALT LAKE CITY — Luq Mughal, a University of Utah student said he's fed up with the increasing tuition bill. Mughal on Tuesday paid his tuition this week with 2,000 single dollar bills as a protest against rising tuition rates. Mughal, 21 avails a discount because of his father being a member of the faculty. He used to pay with card only but this week he took a suitcase full of singles to the … END_OF_DOCUMENT_TOKEN_TO_BE_REPLACED