You are here: Home / Archives for pterosaur 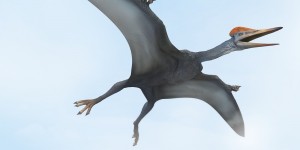 The fossil of the largest known flying creature that has existed roughly 163 million years ago have been found in China. Scientists have named the earliest and most primitive reptile as Kryptodrakon progenitor. The new pterosaur species was discovered by the scientists while working in northwest China. Pterosaurs are believed to be the close relatives of the dinosaurs. They, however, are not … END_OF_DOCUMENT_TOKEN_TO_BE_REPLACED