You are here: Home / Archives for pope francis to make father junipero serra a saint 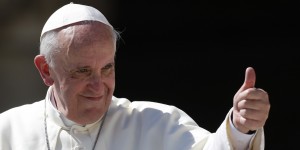 Pope Francis, who is currently on a tour of Asia, has announced that he will canonize Father Junipero Serra when he visits the United States in September. The pontiff made the surprise announcement on his flight to Manilla, the capital of the Phillipines. He was traveling from Sri Lanka, where he had been warmly welcomed by the predominantly Buddhist population. Pope Francis has admitted to … END_OF_DOCUMENT_TOKEN_TO_BE_REPLACED