You are here: Home / Archives for House Committee on Oversight and government reform 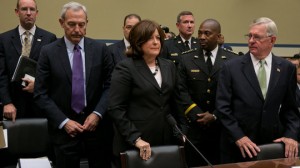 Julia Pierson, Secret Service director, was criticized by lawmakers from both parties on Tuesday, when she testified before the House Committee on Oversight and Government Reform. She was asked to explain the security breaches that occurred at the White House, including the incident with the intruder who managed to make it to the front door earlier this month. The Secret Service director took … END_OF_DOCUMENT_TOKEN_TO_BE_REPLACED