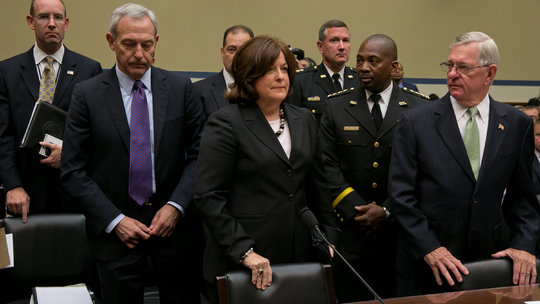 Julia Pierson, Secret Service director, was criticized by lawmakers from both parties on Tuesday, when she testified before the House Committee on Oversight and Government Reform.

She was asked to explain the security breaches that occurred at the White House, including the incident with the intruder who managed to make it to the front door earlier this month. The Secret Service director took full responsibility of what had happened and pledged that such events would never happen again. However, the members of the committee seemed not at all impressed by the promise to comprehensively review the incidents.

Stephen F. Lynch, Democrat of Massachusetts, accused Ms. Pierson and her agency of not taking its duty to protect the president seriously. He added that her leadership was something he had very low confidence in.

“I wish to God that you protected the White House like you’re protecting your reputation right now.”

Ms. Pierson spoke calmly and exhibited little emotion during the first several hours of her hearing, as lawmakers criticized her performance and that of the agency she heads. However, as the audience pressed her for quick answers, she did, at times, appear flustered.

Shortly after Ms. Pierson’s hearing, an announcement was made by the United States attorney’s office in Washington. Mr. Gonzales had been indicted on charges of unlawful entry in a restricted government building while carrying a weapon. Additionally, the grand jury also indicted the 42-year-old of carrying dangerous weapons in public as well as unlawful possession of ammunition.

Ms. Pierson and other Secret Service officials were also accused by lawmakers of having misled Congress and the public about how far inside the presidential residence Mr. Gonzales had actually gotten before his capture.

Representative Jason Chaffetz, for instance, Utah Republican, asked of Ms. Pierson to explain why Secret Service officials had stated that the intruder was stopped just inside the front doors of the mansion. She said that she could not speak for conversations she hadn’t been a part of.

She then explained that the intruder had knocked back an agent inside the building and then made his way through the Entrance Hall, all the way to the East room before being tackled.

Mr. Chaffetz angrily questioned the head of the Secret Service and accused her of the tremendous restraint of force that had been exhibited when dealing with Gonzales. He insisted that for the public, it should be “crystal clear if you dash at the White House, we are going to take you down.”

“I hate to even imagine what could have happened if Gonzalez had been carrying a gun instead of a knife when he burst inside the White House,”