You are here: Home / Archives for hand of god 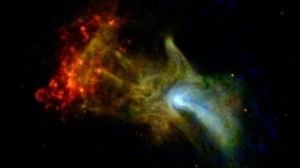 Showing a perfect amalgamation of religion and astronomy, NASA has released splendid new images, including an image of a celestial object that has a similar resemblance to “hand of God” captured by its powerful “black hole hunting” Nuclear Spectroscopic Telescope Array (NuStar) launched on 13 June 2012. NuStar’s is currently operating at the University of California, Berkeley campus. The hand … END_OF_DOCUMENT_TOKEN_TO_BE_REPLACED