You are here: Home / Archives for Ferguson 130-mile march 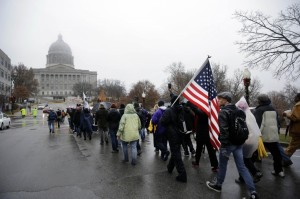 Hundreds of people participated in the 130-mile march, protesting the death of Michael Brown who was killed in a police shooting in Ferguson on August 9. The demonstrators reached the Capitol of Missouri after marching for an entire week chanting “Hands Up! Don’t Shoot!”. Upon arrival at the Capitol, the supporters joined with Brown’s mother, Lesley McSppaden. Michael’s mother, asked … END_OF_DOCUMENT_TOKEN_TO_BE_REPLACED