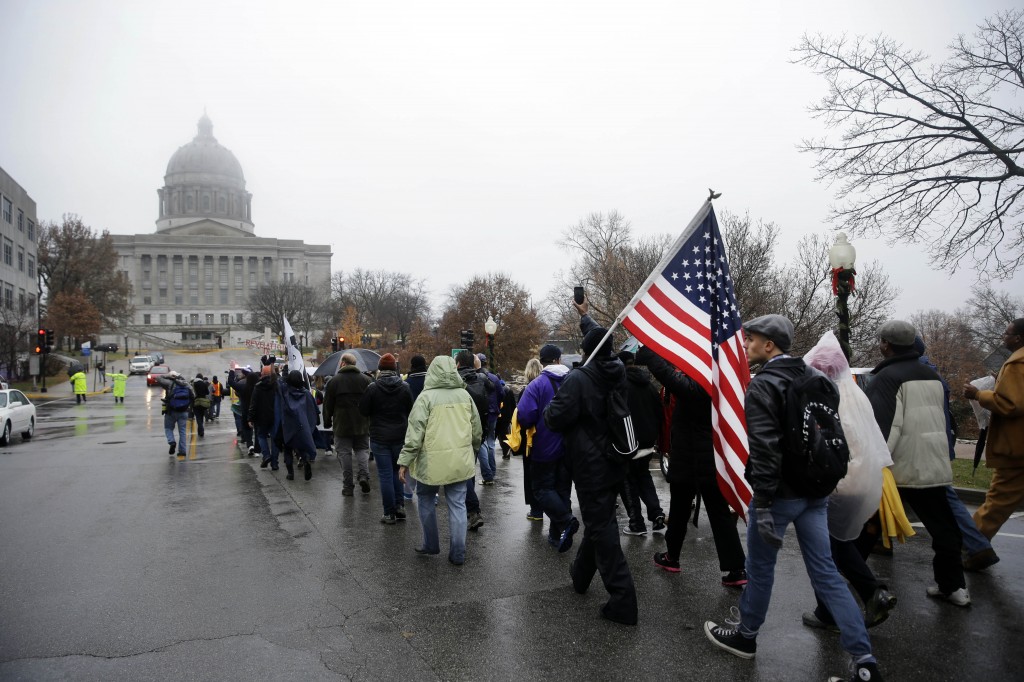 Hundreds of people participated in the 130-mile march, protesting the death of Michael Brown who was killed in a police shooting in Ferguson on August 9.

The demonstrators reached the Capitol of Missouri after marching for an entire week chanting “Hands Up! Don’t Shoot!”. Upon arrival at the Capitol, the supporters joined with Brown’s mother, Lesley McSppaden.

Michael’s mother, asked Governor Jay Nixon to hold the prosecutor in charge of her son’s case accountable for not taking the case of Michael Brown’s death to court. The protest took place very close to Jay Nixon’s office, but, the Governor had left a few hours before the supporters arrived to the Capitol of Missouri.

The chant has become a symbol of the march, because witnesses say that Michael Brown actually had his hands raised up, asking police officer Darren Wilson not to shoot. Other witness testimony suggest that Michael was actually charging at the police officer when he was fatally shot.

NAACP President Cornell William Brooks spoke at the rally that took place at the Capitol of Missouri, calling the grand jury’s process “completely, morally and legally bankrupt”. Later he stated: “ We’re seeking justice for the family of Michael Brown and nothing less than fundamental, systematic reform of policing in this country.”

The case of Michael Brown also started protest around the nation, from people who believe that minorities are often the targets of overzealous police.

Others that opposed the march were seen displaying confederate flags and yelling obscenities regarding this matter in the small town of Rosebud. Though this protest was a peaceful one, sometimes there were tense moments.

Even if the number of people that participated in the march were at times of dozens, when the supporters past by the Mansion of Governor of Missouri and climbed the steps of the Capitol, their numbers were estimated in over a hundred. Police escorts were designated to the front and the rear of the marchers.

Most of the people that participated in this march were black and they came from all over the country to join the fight against police brutality regarding minorities. Protestants held signs that read “Black Lives Matter”, “We Are Mike Brown” and “Right 2 Life”.

Brown’s mother thanked everyone for their support and told people that the most important thing for her is to see police officer Darren Wilson held accountable for what he did to her 18 year-old son. She also said “Our lives matter”.

The leaders of NAACP met with Governor Jay Nixon on Wednesday at his office. It is said that Brooks told Nixon that he should promote legislation providing jobs, education and fairness for all people.

Attorney General Chris Coster issued a written statement later on Friday, after he has met with NAACP officials, saying that “common ground to bring progress” can be reached. In this written statement he talked about police body cameras, municipal court reforms and minority police officer hires in urban areas.