You are here: Home / Archives for cancelled flights 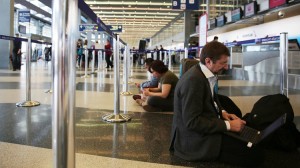 O’Hare and Midway airports were paralyzed for hours because of a fire that began at a suburban Chicago air traffic control facility. All flights were halted on Friday, so that by early morning, there had been 850 cancelled flights and more were being expected before the O’Hare and Midway airports (two of the busiest U.S. airports) would reopen. Passengers who had been flying through Chicago … END_OF_DOCUMENT_TOKEN_TO_BE_REPLACED