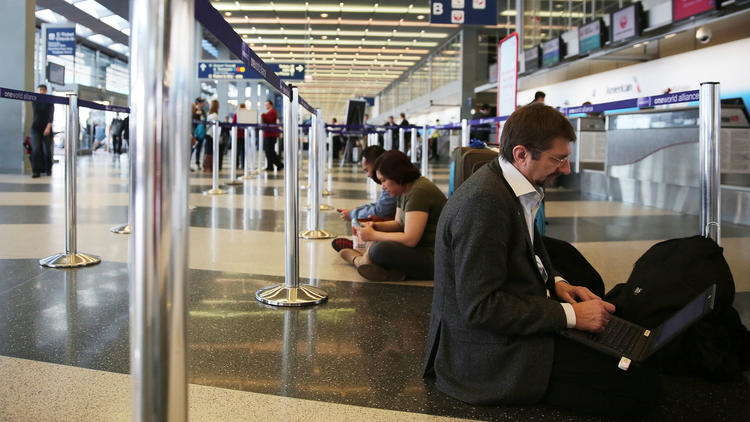 Passengers who had been flying through Chicago were also expected to encounter problems as the delays in Chicago would surely spread through the entire air transport system. The city represents a key hub, where countless connections to other cities occur.

No serious problems were reported, even as the number of cancellations was growing and managed to also hit other airports, from New York to the North-West.

“I have seen a number of people come in, look kind of stunned at the departure screen because everything says canceled. The next thing they do is lift up their iPhones and take a picture,”

performance artist Eric Stern told reporters, as he noticed he too had become one of the stranded travelers in Midway airport.

The fire that caused all the flight cancellations started at the Chicago Air Route Traffic Control Center in Aurora. According to Sgt. Dan Farrelli, police spokesman, the source of the fire was found in the basement of the traffic control center located 40 miles west of Chicago.

Around 5:40 AM, emergency crews arrived at the scene just as the center was being evacuated. The police spokesman also told reporters that a man was found at the scene, who appeared to have self-inflicted wounds. He was transported to a hospital.

While there were some initial fears that the incident could have been terrorist-related, these were soon dismissed by authorities. While Aurora Police Chief Greg Thomas admitted that the fire had been deliberately set, he insisted that it had not been a terrorist act.

“There is no terrorist act. This is a local issue with a contract employee and nothing else.”

Although officials succeeded in bringing the Chicago situation under control, ripple effects were soon visible across the nation. Nine flights were already cancelled at the Los Angeles International airport at 7:30 AM, and similar signs of trouble were also noticed in Portland.

There were other airports were the impact was minimal.

“We have approximately 1,600 flights a day on average. We’re seeing about dozen cancellations. Southwest has canceled about 11. United has canceled two — in and out of Milwaukee. It’s really minimal,”