You are here: Home / Health / Vaccination Exemptions under Debate 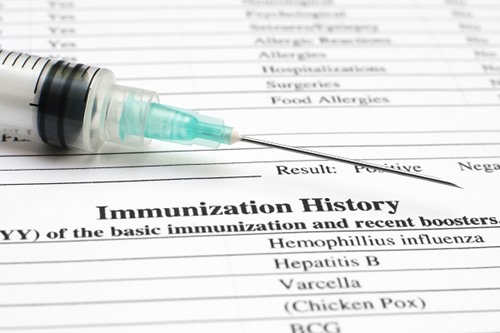 The recent measles outbreak, which spreads slowly yet steadily in the nation, has sparked a hot debate over vaccination exemptions. Even though the majority of parents from Newton County are convinced about the benefits of immunizing their children, there are still debates over whether or not personal choice should be allowed when it comes to vaccines.

Susan Stanford, mother of three vaccinated children, thinks that moral decisions like these should not be mandated by the government, and both sides of the debate should be free to exercise their American right. On the other side is Lisa, another local mother of three, who is adamant about how the state of Georgia should completely get rid of religious exemptions, which presently allow unvaccinated children to attend school. Her utmost concern is the face that not immunizing your children also puts their classmates at risk, and not just them. Also on her side, we have Laci Norman, young mother of a six-month-old daughter, who believes in personal choice, as long as it doesn’t affect other people’s children.

First case of measles was reported in January 1, and just after a week, more than 100 people in 17 states have already been infected with the virus. Measles is a highly infectious disease, which is transmitted by airborne water droplets produced by coughing or sneezing. Distinctive symptoms are runny nose, fever, sore throat and red eyes, followed by an itchy rash which spreads over the body. The most vulnerable demographic are the infants, babies under a year, who cannot be immunized, and also those whose immune systems are already compromised by HIV or leukemia.

Even if Georgia’s percentage of MMR coverage – immunization for measles, mumps and rubella, usually injected together – shows a positive number of 93, the state is also among those who grant medical and religious exemptions from vaccination. Just in the 2013-2014 school year alone, 143 children entered kindergarten with medical exemptions, and almost 2,500 with religious ones. If we multiply this number to all the grades, we reach sheer thousands of unvaccinated children in the school system.

Dr. Sandy Martin, chief of the Religion Department at the University of Georgia, explains that there are a minority of Christians who expect divine intervention through healing, instead of relying on modern medicine, as a proof of their faith. Philadelphia’s measles outbreak from 1990 has killed at least five children, and tracing it to the source, the authorities found out two churches whose preachers were strongly against vaccination. However, Dr. Martin stressed the fact that this minority of fundamentalists does not have a lot of followers who reject modern medicine.

There is a strange phenomenon which explains why there are so many requests for religious exemptions in Georgia. Reports show that at least some parents filed on religious grounds, but they are in fact worried about the possible connection between vaccines and autism. Dr. Melinda Willingham, a pediatrician at Decatur Pediatric Group, has made it her mission to debunk those theories among the parents she can reach. She tries to approach them about their real concerns, and explain to them why are vaccines important, how they work and how they act upon the child’s immune system. After discussing and reading some fact-based websites on the matter, a lot of parents who felt strongly against vaccines eventually come around.

Dr. Willingham explains that children in the 80s or earlier received a lot less vaccines because they did not have so many new infectious diseases that need vaccination. She also strongly advises against changing the immunization schedule, as some parents try to stagger the child’s vaccinations. She says they need to get their shots as it was proven to work.

Dr. Willingham explains why some parents believe that there is a link between vaccines and autism: between 12 and 24 months, the period when children get their vaccinations, is also when autism is usually diagnosed. She is an advocate for educating and informing parents about the reality of these contagious diseases, which can be fatal.

The Infection Control Coordinator for Newton County Medical Center, Jenay Beshears, said that the hospital has not yet received cases related to the recent measles outbreak. However, they are prepared to diagnose, isolate and treat any patient who shows up with measles symptoms.

GA Department of Public Health and CDC has approved their medical procedures, and confirmed that they are following the department’s updated recommendations. Preventive measures for stopping the spread of the disease include making sure that you are vaccinated up to date. You should also avoid close contact with patients who are still contagious, keep a good hand hygiene, stay at home if you are sick, as your immune system is down and vulnerable, and cover your mouth when coughing and sneezing.