You are here: Home / Health / New Device Designed To Treat Obesity Was Approved By The FDA 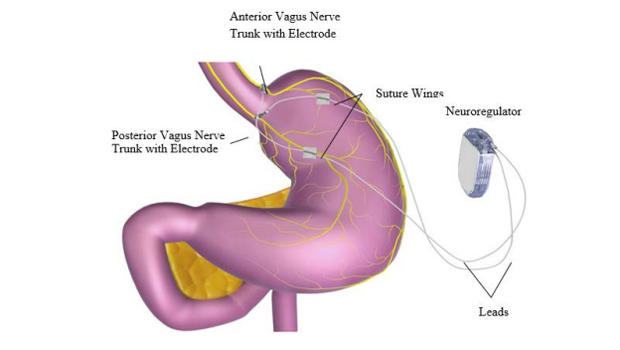 The Maestro Rechargeable System, a new device designed to treat obesity was approved by the FDA. Wednesday, Jan. 14, was the day the U.S. Food and Drug Administration approved this new gadget designed by EnteroMedics Inc. This is the first time since 2007 a device aimed to help patients with weight problems is approved by the F.D.A.

In less than 24 hours since the public announcement, EnteroMedics Inc. shares have seen an increase of 74 percent. By mid-morning, Nasdaq was trading the company’s shares for the value of $1.45, a 23 percent increased price compared to its Tuesday value.  It later rose to $2.05.

The Maestro Rechargeable System modifies the patient’s sensation of hunger and fullness by operating on the nervous pathway that connects the brain to the stomach and vice versa. The device is surgically implanted in the patient’s abdomen. Once activated, it sends electrical pulses that modify the activity of the vagus nerve. The main role of the vagus nerve is to “tell” the brain when the stomach is empty. By interfering with its activity, the person feels hungry less frequent.

The gadget is rechargeable, a responsibility belonging to the patient. Healthcare professionals will be able to modify its settings with the help of external controllers.

The gadget was tested during a 12-month clinical trial. The participants implanted with the Maestro Rechargeable System lost 8.5 percent more weight compared to the control group. Although the device failed to meet the study’s main goal which was for the participants to lose 10 percent or more in comparison to the control group, the F.D.A considered the study showed an appropriate benefit-risk ratio.

This device is recommended to people over 18 years old that are unable to lose weight by dieting and exercising, with a body mass index (BMI) ranging from 35 to 45 and suffering from at least one obesity-related condition such as Type II diabetes. By definition, if a person’s BMI is over 30 then that person can be considered obese.

There are however, a few more steps that need to be taken before the gadget reaches hospital shelves. The issue of finding insurance companies interested in investing is still not resolved. According to analysts, the problem may remain unsolved for another two years.

Furthermore, the EnteroMedics company is required to conduct a 5-year study that will test the device on a minimum of 100 patients in order to obtain additional safety and effectiveness data.

Up until now, a number of important side effects were reported during the first trial, some of which being nausea, pain, vomiting and surgical complications.
Image Source: CBS News