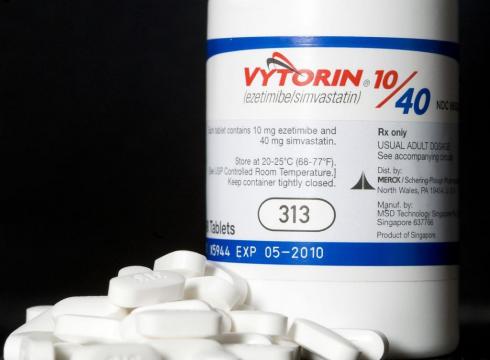 According to researchers at the American Heart Association who presented data from an randomized, double-blind study of 18,144 high-risk patients, it had been found that patients taking Vytorin, a combination of the cholesterol-lowering statin Zocor plus Zetia, a non-statin, experienced fewer heart attacks, strokes and repeat hospitalizations than those who were taking just statins.

Lowering LDL also known as bad cholesterol, to prevent heart disease has been a longtime highlight among doctors. Statins like Lipitor, Crestor and Zocor are the main medicines for this, and a lot of research shows they work. Merck & Co.’s ezetimibe, which went on sale in 2002, lowers cholesterol in a different way. It’s sold as Zetia and, as a combo pill with Zocor, as Vytorin.

It’s true that the drug won the approval for lowering LDL by the Food and Drug Administration , but some studies suggested that this might not necessarily mean fewer heart attacks and strokes. Moreover one study even questioned whether it raised the chance of cancer. Zetia and Vytorin have racked up billions of dollars in sales over more than a decade without evidence they help prevent heart attacks and strokes. The study of 18,000 people tested Vytorin versus a statin alone in people who had recently had a heart attack or worsening chest pain from a severely blocked artery.

Nevertheless these statins are seen almost as miracle cures. Among the most widely prescribed in the world, they succeed in lowering a person’s cholesterol to very low levels with few side effects. But they don’t work for everyone and some can’t tolerate a full dose as it can can cause muscle pain, digestive issues and liver damage.

“We’ve answered all the questions. Now we know that with this different way of lowering cholesterol, you can in fact prevent heart attacks and strokes,” said one study leader, Dr. Christopher Cannon of Brigham and Women’s Hospital in Boston. “This is the first time that something added to statins has been shown to be beneficial,” he added.

But keep in mind the fact that the study doesn’t mean that Zetia and Vytorin can help people who have not yet suffered a heart problem, as the 18,000 study participants either had a recent heart attack or worsening chest pain from a severely clogged artery. Approximately 1.1 million people face this situation in the United States alone each year.