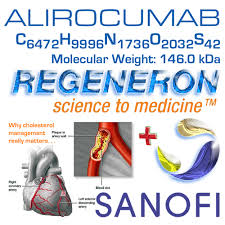 The study was retrospective and as such, is not yet conclusive, but it represents the first stepping stone in the study of drugs targeting the PCSK9 protein, which is believed to reduce the cardiovascular risk for millions of patients worldwide.

Amgen and Pfizer have also been developing similar drugs. It is called alirocumab and represents a whole new class of drugs that lower bad cholesterol (LDL- low density lipoproteins). Experts believe that the new class of drugs will reap revenue of billions of dollars once they receive FDA approval.

Specialists desire to confirm the effects of the drug before seeking approval, but it would seem that even so, the drug could reach the market as soon as next year.

Alirocumab is an injectable substance that has shown significant LDL reductions according to statements by Sanofi and Regeneron. They have made the results of four studies public at the meeting of the European Society of Cardiology in Barcelona.

The results that have sparked the enthusiasm of many cardiologists came from the safety analysis of one of the studies in which researchers noticed that patients who had taken alirocumab had a lower risk of suffering a combination of cardiovascular events that included sudden cardiac death, heart attack, stroke and hospitalization following chest pain.

The study included 2.341 patients and will be concluding somewhere in early 2015. According to researchers, the sign of effectiveness is already clear in the Odyssey Long Term Study.

Dr. Jennifer Robinson, leader of the study and cardiologist at the University of Iowa expressed her enthusiasm about the quick appearance of results so early in the study.

Up to now, drug makers haven’t released any data that would suggest that PCSK9 inhibitors would reduce cardiovascular risk.

According to Dr. Patrick T. O’Gara at the Brigham and Women’s Hospital in Boston, cardiologists taking part in the study should proceed with caution. The efficacy of the drugs is so desired that, although the drug is biologically plausible, caution is required to ensure the accurateness of the results.