A bizarre series of events on Sunday led to an officer being punched by Spiderman, in New York Times Square. Of course, we are not talking about the real Spiderman, from the Marvel universe, but a street performer dressed as him. 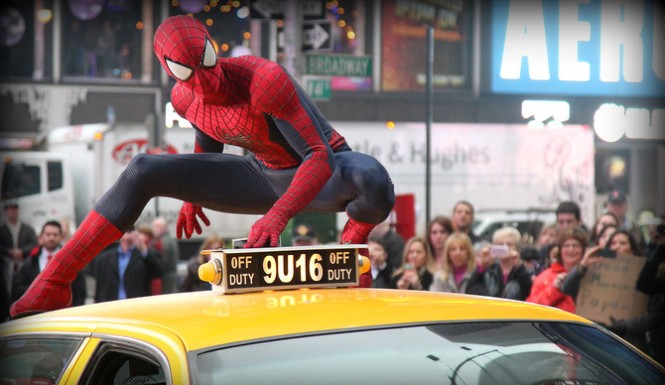 This unusual super-hero makes a living out of the tips that he receives from tourists and local people. Although he is allowed to perform on the street, he is not allowed to demand any type of tips or question the amount given by people. So how exactly did an officer get punched by Spidey?

It seems that the 25-year-old performer, called Junior Bishop took a photo with a woman. In exchange for the photo the woman offered to tip him for one dollar. Of course, this was not enough for the strong Spiderman. He refused the dollar bill and asked a larger denomination from the woman. That is when a police officer overheard the conversation. He told the woman that she is allowed to tip as much as she wants (says the official police report).

All the officer did was remind the street performer of the rules, but when he did this, Bishop said “Mind your own business”.

This is not the first time that something like this happens. The New York times actually reported that N.Y. police have been trying to solve this type of small crimes for quite some time now. Many other street performers were arrested. One of the people arrested was another Spiderman that punched a tourist who pelted him with snow (again, the tourist did not tip the street-performer for a photo). Another case is that of an Elmo who used anti-semitic language, and a Cookie Mosnter who decided that it is a good idea to pushed a 2-year-old child after his mom decided he does not want to tip him for the photo.

At present, our aggressive Bishop Spiderman is accused of misconduct, resisting arrest, criminal mischief, assaulting an officer and disorderly conduct. This was also not Bishop’s first time at being arrested. He had a similar behaviour in the past as well, reports the New York Times.

At the moment, the police officer is being treated for swelling around the eye and a shallow cut on the face.