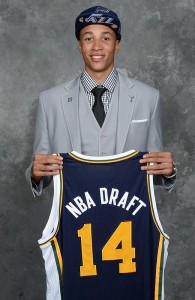 The Utah Jazz pick in Thursday’s NBA draft had the wheels of the rumor mill spinning for weeks before the event, but Friday morning found Salt Lake City basketball fanatics more than pleased with the draft’s final outcome. In a move that went above and beyond the expectations of the team’s community of fans, the Utah Jazz selected Australian guard Dante Exum among their NBA draft picks.

The event, which took place at Energy Solutions Arena before an increasingly energetic, massive crowd, saw Utah Jazz fans grow eager with anticipation. They couldn’t wait to hear the name of the players the Jazz would pick and they became more and more restless regarding Exum, as one team coach after another passed him up. In the run-up to being selected by the Jazz, Exum was disregarded by Cleveland (Andrew Wiggins), Milwaukee (Jabari Parker), Philadelphia (Joel Embiid), and Orlando (Aaron Gordon). Then came the Jazz’s turn – in the blink of an eye the team decided the Australian would be headed for Salt Lake City, Utah. According to Aaron Falk, from the Salt Lake Tribune, “For months, the Australian point guard had been projected to be one of the first players taken, certainly off the board by the time the Orlando Magic would pick at No. 4. But Exum knew the label attached, and was braced for the possibility that it might cost him a spot or two. ‘I was the mystery in this draft,’ he said. ‘I could drop.’ The Utah Jazz are elated he did.”

During the first part of the draft event, Exum sat (im)patiently at his table, Falk reports, awaiting a phone call and a hat. He watched as the top picks of other teams were posted on the event board: Andrew Wiggins went to Cleveland, Jabari Parker to Milwaukee, Joel Embiid to Philadelphia, and, finally, the Magic’s fourth pick was Arizona’s Aaron Gordon at No. 4. This was the first actual surprise of the draft, immediately followed by the Jazz’s decision to select Exum as the fifth pick in the overall draft.

Falk also writes that fans of the Jazz view Exum’s selection as the fifth pick as a real gift. Fans of the team assembled on Thursday night at the Energy Solutions Arena and they watched on. There were cheers for Gordon, but the cries of joys heard when Exum was called were even louder. Exum’s pick comes at the end of one of the team’s worst seasons in the history of the franchise: they experienced no fewer than 57 losses this year. As Falk reports, “after seeing the ping-pong balls bounce unfavorably at last month’s lottery, pushing the Jazz back to the fifth pick, it’s a moment most didn’t think would happen.””