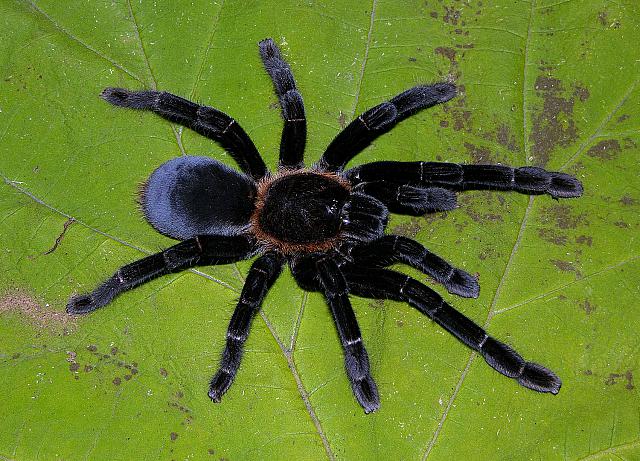 Scientists have identified a new compound in Tarantula venom which can be used to relieve pain.  This can be of great use for people who suffer from pain caused by cancer and chronic or degenerative diseases or pain whose cause is not identified.  In the US chronic pain is the most well-known cause for incapacity.

A research led by Prof. Glenn King of the Institute for Molecular Bioscience at The University of Queensland in Australia has shown that the sodium ion channel Nav1.7 which is present at the endings of pain-sensing nerves is the most common pathway observed in cases of chronic pain.  According to Prof. Glenn King, what is needed is a compound which should block Nav1.7. By blocking this pathway, the brain will no longer receive the pain signals.

Spiders kill their prey by injecting venom. They venom contains peptides, some of which can block nerve activity. The use of spider venom to reduce pain is not something new. Scientists have studied this idea before. What came as a challenge was the fact that there are 9 million spider-venom peptides and so far, only 0, 01% of them were explored.

In order to ease this job researchers have invented a system which is described as a “high-throughput fluorescent-based assay”.With help of this system, 205 species of spiders were explored. They found seven compounds that could work, among which Hd1a. This compound comes from a spider belonging to the tarantula family (Haplopelma doriae) and it was the most promising.

Hd1a can block the Nav1.7. In addition to this the compound’s chemical, thermal and biological structures are stable, which means it can be used in painkillers. It seems that the class of painkillers that can be developed from venom will have fewer side effects than the standard medication used for chronic pain. Dr. Julie Kaae Klint from the Institute for Molecular Bioscience said that tapping of this natural source of new medication brought a hope of accelerating the development of a new class of painkillers that can help people who suffer from chronic pain and cannot be treated with current treatment options.

On top of that the search for a way to relief pain seems to have opened other paths. Thanks to the creation of the system that enabled them to detect Hd1a, the researchers can further analyze other animal venoms and use them for other therapies.