The situation in Liberia is getting out of hand. Liberia was forced to quarantine several remote villages at the epicenter of the Ebola Virus in order to contain the virus. This “plague villages” are reminiscent of medieval Europe, where several cities were shut off from the outside world in order to prevent a deadly virus from spreading.

The problem is that the “plague villages” are not receiving sufficient medical and food supplies for their inhabitants. Villagers are now faced with an extremely difficult decision. They can either stay here and hope that help will come, or they can run for the jungle in order to find food and skip the quarantine. The latter option will make it even more difficult for medical specialists to prevent the infection from spreading further into a country that is not equipped to deal with Ebola. 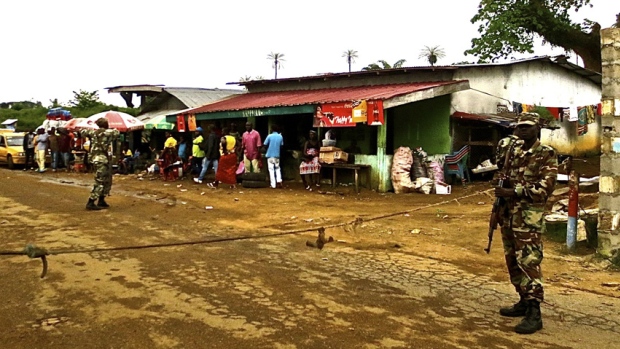 Take Boya as an example. This northern Liberia Lofa County village is low on supplies and medical specialists. Joseph Gbembo caught the disease and survived but he now has to take care of 10 children that are under five years old. He also has to support no less than 9 widows because 9 of his family members were taken by the virus. Nobody wants to help him and villagers are blaming him for bringing the virus to their home

“I am lonely (…) Nobody will talk to me and people run away from me.” – Joseph Gbembo

This is not the only case. Aid workers said that they require assistance to deal with Ebola virus and the undergrowth which is already spreading between houses.

“If sufficient medication, food and water are not in place the community will force their way out to fetch food and this could lead to further spread of the virus.” – Tarnue Karbbar, worker for charity plan International

The Ebola virus has already claimed 1145 lives in West Africa. The alarming fact is that the Lofa County has reported more cases than anywhere else (124 new cases and 60 dead).

President Ellen Johnson Sirleaf was forced to impose emergency measures (including the quarantines and “cordon sanitaire”). She has organized several medical roadblocks (enforced by troops under operation “White Shield”) to prevent people from running in the jungle.

At the moment, most Ebola victims remain at large because there are simply not enough clinics to treat them. Most hospitals are already considered “death traps”.

“There has to be concern that people in quarantined areas are left to fend for themselves (…) Who is going to be the police officer who goes to these places? There’s a risk that these places become plague villages.”

Liberia’s response team is struggling to keep up, and more than a dozen health care workers have already died to Ebola in the county because there are no computers to manage cases.

“We can establish as many checkpoints as we want but if we cannot get the food and the medical supplies in to affected communities, they will leave.”