You are here: Home / Health / Gut Bacteria Could Help Identify People Who are at Risk for Cancer

A new study that analyzed gut bacteria has revealed that it could improve identification of the people who are at risk or who already have colon cancer. Apparently, it is possible to tell if a person will develop colon cancer, based on the bacteria found in their gut!

The analysis of the composition of gut bacteria which is also called gut micro biome helps determine what people are at risk of developing colon cancer or it can help detect colon cancer that has already invaded the system.

The researches collected stool samples from 90 people: 30 completely healthy adults, 30 people who had precancerous intestinal polyps and 30 with advanced colon or rectal cancer. This was done to analyze the composition of the intestinal micro biomes. 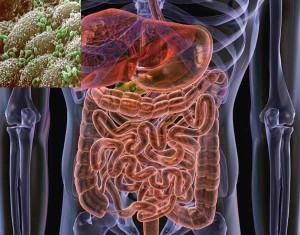 The study was published in Cancer Prevention Research where it was revealed that each of the group had a different gut bacteria composition and has many implications as a whole new colon cancer diagnostic method emerges.

The study author, Patrick Schloss, who is also an associate professor in the department of immunology and microbiology at the University of Michigan, had this to say about the results of the study.

If our results are confirmed in larger groups of people, adding gut micro biome analysis to other faecal tests may provide an improved, non-invasive way to screen for colorectal cancer.

The prediction of precancerous polyps was 4.5-fold improved when the scientists added analysis of the intestinal micro biomes to those of age and race.

They also found that this type of analysis was better than the faecal occult blood testing, which is a type of stool sample, at telling apart people with invasive cancer from people with precancerous polyps.
Another important tool is that of the BMI (body mass index) in determining what people are more predisposed to colon cancer, but BMI combined with faecal occult blood test and gut micro biomes are very effective at correctly identifying the type of disease and the stage of cancer.

Our data show that gut micro biome analysis has the potential to be a new tool to non-invasively screen for colorectal cancer. We don’t think that this would ever replace other colorectal cancer screening approaches, rather we see it as complementary.

Sounds quite promising, doesn’t it? What are your thoughts on this news? We invite you to leave us a comment in the section below?