You are here: Home / Health / Hungary Has a New Case of Anthrax in Beef 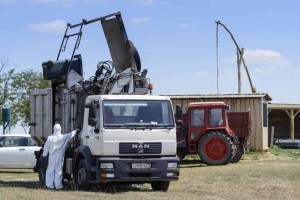 Hungary has on its hand a new case of anthrax found in beef, which can be the start of a potential epidemic. The infection of anthrax has been found in beef in the eastern part of Hungary, the Heves County. One person who is showing symptoms of the disease is receiving medical treatment.

The statement was published on the veterinary authority NEBIH on Monday night. Apparently the disease was found in the meat of a cow that was slaughtered in a home and not a slaughterhouse. But this is not as reassuring as it may sound because last week anthrax popped up in frozen beef in a different part of Hungary. The two cows in which anthrax was found were illegally slaughtered on a farm.

NEBIH did the common sense thing that would reassure the country and said that the two cases were not related. It claimed that the animals were infected through their food, most likely through grazing in contaminated fields. How did the bacteria get there? Well, floods or drought can cause the water and wells become contaminated, thus ending up in the grass and ground.

Five more people are in hospital being treated for the disease they contracted after eating the illegal slaughtered meat, from the anthrax batch of last week. Some of the beef had been delivered to a company that serves canteens, which lead to the operation of the company being suspended. The authorities are trying to find out if more people came in contact with the infected meat. As a precaution measure they have started vaccinating animals that could have been exposed to the anthrax. Last week they have said that:

The authorities have taken the necessary measures, so there is no longer an immediate danger

This new case of anthrax rocks shakes the spirits even more in Hungary.

Anthrax is a disease that is caused by the bacterium Bacillus anthracis. If detected early and treated with a powerful dose of antibiotics, anthrax can be cured, but if it is not, it is deadly. Until 1881 when Louis Pasteur developed the first vaccine for anthrax, the disease killed hundreds of thousands of people and animals every year. You can contract the disease through inhaling the spores of the bacteria or consuming infected meat. Pulmonary anthrax starts off like a flu and quickly escalated. If the disease is not recognized early, 97% of cases are fatal. Gastrointestinal infections start with vomiting of blood, severe diarrhea and acute inflammation of the intestinal tract. Cutaneous anthrax is the least fatal form of anthrax and it presents as a boil-like lesion of the skin that forms an ulcer with an eschar, or a black center.