You are here: Home / Health / ‘Most Challenging’ Deadly Disease Outbreak: WHO Speaks Out On Ebola Dangers

“The Ebola outbreak in West Africa is the deadliest ever seen and the virus is raging totally out of control,’’ an official with Doctors without Borders said on Friday. The number of people killed by the deadly Ebola virus, which causes a particularly nasty form of hemorrhagic fever, in West Africa has risen to 337, the World Health Organization (WHO) said.

Fourteen deaths and 47 new cases were reported across the region over the last week, it added.Guinea is worst-affected with 264 Ebola-related deaths. In Sierra Leone there have been 49 deaths and in Liberia 24, the WHO said.

The three countries have been battling to contain the outbreak since February. The outbreak began in southern Guinea’s Guekedou region but then spread to its neighbours.More than 500 suspected or confirmed cases of the virus have been recorded, the WHO said. 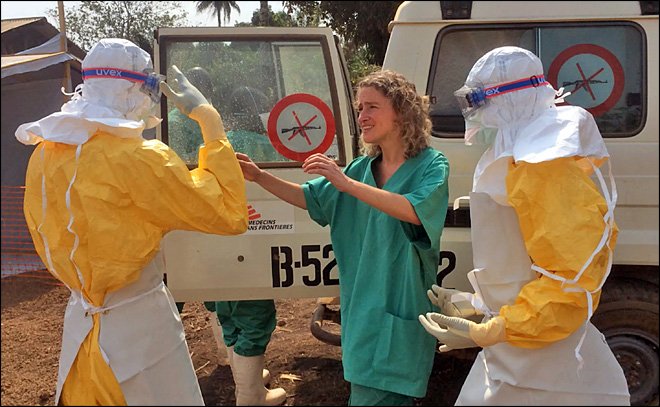 There is no cure or vaccine for Ebola, one of the world’s deadliest viruses. It is spread by close contact and kills between 25% and 90% of those infected depending on the strain of the virus, according to the WHO. Symptoms include internal and external bleeding, diarrhea and vomiting. On Tuesday, Liberia reported the first Ebola related deaths in its capital city, Monrovia.

This is the first time an Ebola outbreak has hit multiple locations in three countries, reports BBC International Development correspondent Mark Doyle. The people who inhabit the region where Guinea, Liberia and Sierra Leone meet are from the Kissy ethnic group and they cross the often unmarked borders freely to farm and trade. So maintaining medical controls is a real challenge, our correspondent says.

International organizations and the governments involved need to send in more health experts and increase public education messages about how to stop the spread of the disease, Bart Janssens, the director of operations for the group in Brussels told the Associated Press on Friday.

‘‘The reality is clear that the epidemic is now in a second wave,’’ Janssens said. ‘‘And for me, it is totally out of control.’’

The outbreak which began in Guinea either late last year or early this year had appeared to slow before picking up pace again in recent weeks including spreading to the Liberian capital for the first time.

‘‘This is the highest outbreak on record and has the highest number of deaths, so this is unprecedented so far,’’ said Armand Sprecher, a public health specialist with Doctors without Borders.

According to a World Health Organization list, the highest previous death toll was in the first recorded Ebola outbreak in Congo in 1976 when 280 deaths were reported. Because Ebola often touches remote areas and the first cases sometimes go unrecognized it is likely that there are deaths that go uncounted, both in this outbreak and previous ones.

“The multiple locations of the current outbreak and its movement across borders make it one of the most challenging Ebola outbreaks ever,’’ Fadela Chaib, a spokeswoman for the World Health Organization said earlier in the week. “The outbreak shows no sign of abating. Government and international organizations are far from winning this battle,’’ Unni Krishnan, head of disaster preparedness and response for Plan International said on Friday.

The epicenter of the outbreak was the Guinean city of Gueckedou, a major regional transport hub. Past outbreaks, the disease have hit sparsely populated areas in east or central Africa. The outbreak is particularly problematic because it has hit an area where people are highly mobile and then spread to areas of dense population like the capitals of Guinea and Liberia.

The only treatment available is either by oral rehydration therapy or intravenous fluids but only about 10 percent of people infected survive and there is no vaccine.

Molecular model of parts of the Ebola virus:-

5) There is no vaccine or cure.

6) Supportive care such as rehydrating patients who have diarrhoea and vomiting can help recovery.

7) Fruit bats are considered to be the natural host of the virus.