The latest data on a pair of rival therapies for fatal idiopathic pulmonary fibrosis (IPF) came out with a clear proof of their ability to slow down the lung disease leading to a major breakthrough in the treatment of the deadly disease.

Pulmonary fibrosis (PULL-mun-ary fi-BRO-sis) is a disease in which tissue deep in the lungs becomes thick and stiff, or disfigured, over time. The formation of scar tissue is called fibrosis. Sometimes doctors are able to discover the reason of fibrosis. But in most cases, they can’t find a cause. They call these cases IPF.

The drugs, pirfenidone and nintedanib, slow the decline of patients with idiopathic pulmonary fibrosis, the researchers said during a meeting of the American Thoracic Society in San Diego.

Among more than 1,000 patients in the two studies, the drug arms showed a decline in the annual rate of FVC (a standard yardstick called forced vital capacity) decline of 48% and 55. The drug inhibited the tyrosine kinase inhibitors.

At least 80,000 Americans suffer from idiopathic pulmonary fibrosis, which is fatal within three to five years for most patients.

Pirfenidone, the InterMune’s drug showed much better outcome than the sample arm on FVC as well. After a year of therapy, 16.5% of the patients in the drug group showed 10% or greater decline after a year’s therapy in FVC. 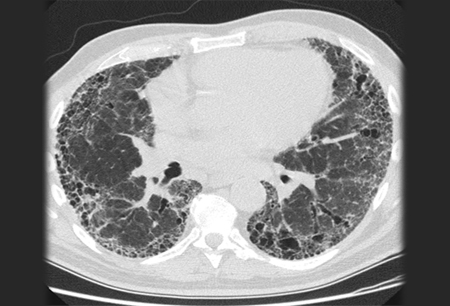 Experts said that current therapies for IPF can only unsharpen the symptoms of the disease, rather than alter its deadly course.They eyes of large group of investors are there on every step of the IPF race being between these two companies. Boehringer need to overcome some secondary endpoint gaffes, though its drug remains very promising.

In an editorial in The New England Journal of Medicine, Brigham & Women’s Gary Hunninghake also noted that there were some forewarnings to consider.

“Although these results are a major breakthrough for patients with idiopathic pulmonary fibrosis, we should be cautious in extrapolating these findings to patients who fall outside the recruitment criteria for these trials,” Hunninghake wrote. “The studies provide little insight into the use of these drugs in patients with more severe disease (FVC <50% of the predicted value) or with an acute disease exacerbation.”