You are here: Home / Archives for turns himself in 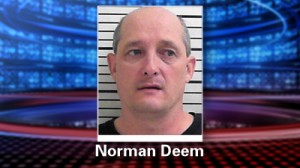 FARMINGTON, Utah — Norman Deem, 43, a convicted sex offender who pretended his death last year according to the police has turned himself in. According to the Davis County Sheriff’s Office, Deem was booked into the Davis County Jail on January 22. “Mr. Deem walked into our jail lobby, identified himself, and explained that he had a couple warrants for his arrest,” said Deputy Ellis … END_OF_DOCUMENT_TOKEN_TO_BE_REPLACED