You are here: Home / Archives for Ebola stigmatization 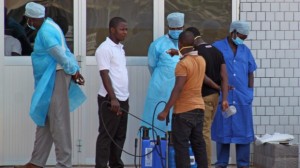 West Africa is witnessing the worst Ebola outbreak which has claimed over 145 lives so far. Guinea and Liberia, cities worst hit by the fatal disease, are facing more serious problem than the fatal Ebola virus. The handful of the Ebola survivors are not able to celebrate their win against death as the stigma carried by the deadly disease is making their life hell. The people who remained … END_OF_DOCUMENT_TOKEN_TO_BE_REPLACED