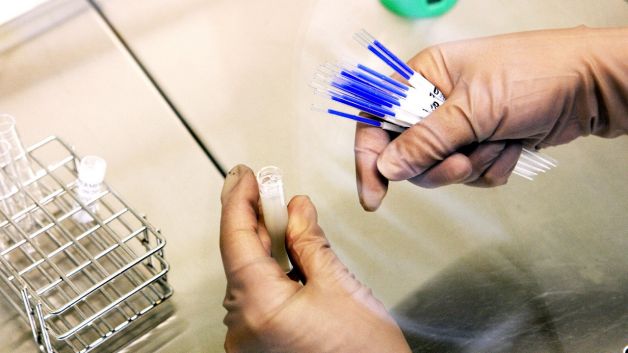 A sperm bank based in Downers Grove is being sued by a lesbian woman after the company allegedly delivered the wrong sperm for her artificial insemination. According to her, the bank mistakenly provided vials of sperm from an African-American donor and that she and her same-sex life-partner are now having difficulties raising their 2-year old daughter in an all-white community.

Jennifer Cramblett, from Uniontown, Ohio, has filed the lawsuit in the Cook County Circuit Court on Monday. In that lawsuit, she accuses the Midwest Sperm Bank of having sent her vials of the incorrect donor in September 2011 as opposed to the donor she and her white partner had decided on. According to Cramblett and her partner, Amanda Zinkon, donor No. 380 was chosen, a caucasian male. However, what they received from their doctor in Ohio were vials from donor No. 330.

The mistake came to light in April 2012, when Crambeltt was still pregnant but had decided to order more vials so that she and her partner could conceive again with sperm from the same donor.

The woman is now suing Midwest Sperm Bank for wrongful birth and breach of warranty. She and her same-sex partner are citing the emotional and economic losses suffered.

“On August 21, 2012, Jennifer gave birth to Payton, a beautiful, obviously mixed-race baby girl. Jennifer bonded with Payton easily and she and Amanda love her very much. Even so, Jennifer lives each day with fears, anxieties and uncertainty about her future and Payton’s future.”

The claim also states that Cramblett and Zinkon have encountered difficulties in raising Payton in their small, all-white commuity, because of stereotypical attitudes about nonwhites. The claim also explains that Jennifer herself has limited cultural competency in relation to African-Americans and that she considers her current residence, Uniontown, to be too racially intolerant.

“Though compelled to repress her individuality amongst family members, Payton’s differences are irrepressible, and Jennifer does not want Payton to feel stigmatized or unrecognized due simply to the circumstances of her birth. Jennifer’s stress and anxiety intensify when she envisions Payton entering an all-white school.”

Cramblett was advised by her therapist to locate to another, racially diverse community, where her child’s psychological well-being wouldn’t be jeopardized.

The Sperm Bank acknowledged its mistake, the lawsuit claims, as Cramblett received a typed letter of apology as well as a refund check for the vials of incorrect sperm they sent out. Apparently, the error occurred because the bank has handwritten instead of electronic records, which caused that the donor numbers be misread.