You are here: Home / Archives for Zack Greinke 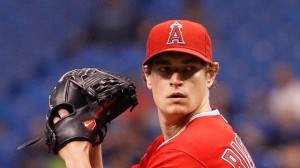 Garrett Richards pitched a five-hitter for his first career shutout, while Mike Trout and Albert Pujols both had RBI doubles in a four-run first inning, and thus the Los Angeles Angels opened the interleague showdown with a 5-0 victory over the Los Angeles Dodgers on Monday night. "I know from playing with him and watching him the last couple of years that he's got some of the best stuff in … END_OF_DOCUMENT_TOKEN_TO_BE_REPLACED