You are here: Home / Archives for southern China 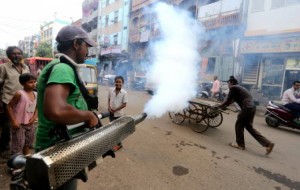 While Africa struggles with the worst Ebola outbreak in history, Asia has to deal with the worst Dengue virus outbreak in the last two decades. More than 23,000 people from southern China have been infected at the latest count on Monday. Official media reports that around 1,000 new cases are registered each day. Six people have died so far. Dengue fever has first been noted in the second part … END_OF_DOCUMENT_TOKEN_TO_BE_REPLACED