You are here: Home / Archives for Goblin Valley rock 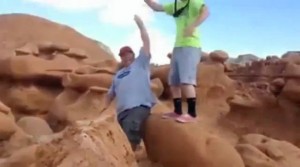 Two men have been charged with third-degree felonies for toppling a rock formation in Goblin Valley State Park in October last year. 42-year-old David Hall and 45-year-old Glenn Taylor were charged in Castle Dale’s 7th District Court with third-degree felony criminal mischief for their involvement in pushing over the rock formation in the state park and recording their mischievous act in a … END_OF_DOCUMENT_TOKEN_TO_BE_REPLACED