Two men have been charged with third-degree felonies for toppling a rock formation in Goblin Valley State Park in October last year.

42-year-old David Hall and 45-year-old Glenn Taylor were charged in Castle Dale’s 7th District Court with third-degree felony criminal mischief for their involvement in pushing over the rock formation in the state park and recording their mischievous act in a video. 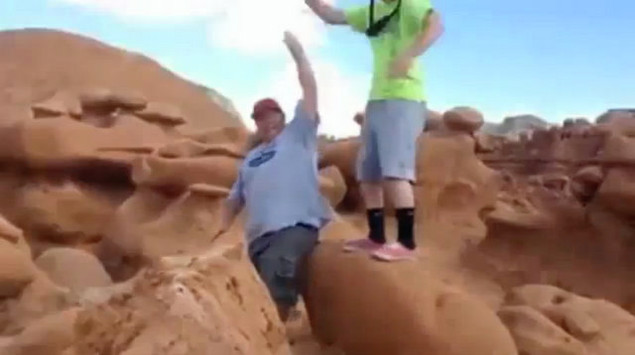 If convicted, the men could face up to five years in prison and a fine of up to $5,000. Their initial appearance in the case is scheduled for March 18.

The video shows Taylor pushing a hoodoo from its perch while laughing and joking during a Scouting trip.

Extending apology for the mischief, Hall said, “We’ve said what needed to be said in the past, we’ve apologized, we’ve said we’re sorry, (and) we’re happy to see this thing coming to an end. We’re just not going to be making any interview appointments, statements, anything. What’s said has already been said.”

The accused also clarified their act saying they pushed the rock as it was posing a danger to the troop.

However, the video showed them enjoying the offence. The video that has gone viral has sparked outrage across the nation, resulting in hate mail and death threats for the men.