You are here: Home / Archives for Chichen Itza 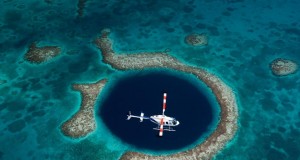 After analyzing the sediments inside two underwater caves nearby the coast of Belize, researchers found that the Maya civilization might have gone extinct after two one-hundred-year long droughts. The sediments revealed that there was a major drought in the islands between A.D. 800 and A.D. 900, two centuries before the Mayan people vanished. During their research, scientists analyzed the … END_OF_DOCUMENT_TOKEN_TO_BE_REPLACED