You are here: Home / Health / Family of Child Suffering From Sanfilippo Syndrome Voluntarily Quarantine Themselves 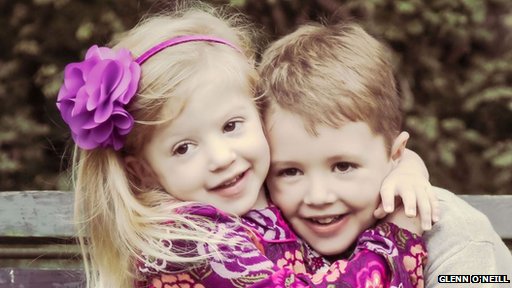 The family of a terminally ill 5 year old has decided to do whatever it takes to try to prolong their daughter’s life.

Eliza O’Neill is one of the sweetest girls in the world but she has to struggle with a rare genetic disease called Sanfilippo syndrome. The illness is terminal and has no cure.

In hopes of prolonging their child’s life, the family of four has put themselves in quarantine since May and has as little contact with the outside world as possible. Even Ben, Eliza’s 7 year-old brother has to comply. Cara, their mom, home-schools him after she gave up her job as a pediatrician in order to be closer to her daughter. All the groceries that enter their home have to be disinfected and thoroughly inspected, since even something as a minor cold can cause Eliza’s little organism to shut down.

The syndrome affects one in 70,000 live births and it’s a disorder that causes the lack of an enzyme, making the organism incapable of breaking down heparin sulfate (sugar molecules), a natural occurring process inside cells. The sulfate then starts building up and affects the child’s ability to speak, move or sleep. Symptoms are very much like those of autism.

Eliza is currently losing her ability to speak and over time, according to doctors, she will not be able to walk or breathe.

The only way to save Eliza’s life is by finding a cure, so the family has initiated a fund raising campaign to help scientists with further research and start a Clinical Trial. In order to do so, they have to raise nearly $2.5 million.

Mr. O’Neill found help while watching one of Karen Cheng’s videos. The short movie pictured her struggling to learn how to dance. After getting in touch with Karen, the family managed to make their own video in which they seek help from the viewers. The campaign was a success and has currently brought them little over $1.3 million. Another 400,000 dollars was raised through other methods.

Haiyan Fu and Doug McCarty are the researches that have been studying Sanfilippo Syndrome and that have conducted gene therapies and experiments on mice. Although they too are eager to start, even if the family succeeds to raise the whole amount of money, the Trial still has to be approved by Food and Drug Administration (FDA). If it gets approved, no one can assure Eliza a spot, since there are no parameters set for the research yet so it’s impossible to predict which children will be in the study.

However, the O’Neills are not losing their hope and they continue their struggle to help Eliza and other patients that suffer from Sanfilippo Syndrome, to live.