Avastin, the new drug developed for the treatment of several types of cancer  has finally been approved for the treatment of cervical cancer in combination with chemotherapy by the Food and Drug Administration. Avastin (containing bevacizumab, monoclonal antibodies)is an angiogenesis inhibitor. It slows the development of new blood vessels that form in and feed tumors.

While bevacizumab is already used in the treatment of other types of cancer, such as kidney, glioblastoma, colorectal, lung or ovarian, it hadn’t yet been approved for the treatment of cervical cancer. 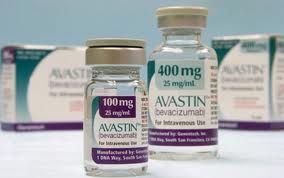 The Food and Drug Administration is now following a new regulatory policy. This policy grants them the permission to give therapies that show noticeable improvements over existing therapies a priority review status.

Currently, Avastin has become the first medication approved for cervical cancer while topotecan and cisplatin were already approved previously.

During its review process of Avastin, the Food and Drug Administration reviewed data that had been included in a clinical study with more than 450 patients. These patients had been suffering from persistent, recurrent or late stage cervical cancer. Throughout the randomized study, patients received different forms of chemotherapy and results were greatly in favor of bevacizumab.

The drug has now been put on a growing list of agency approvals as the VEGF targeting drug is proving its effectiveness in almost all types of cancers. VEGF (or vascular endothelial growth factor) is a protein that stimulates angiogenesis (the growth of new blood vessels that feed malignant tumors) and bevacizumab targets this protein and hinders endothelial growth.

Avastin was first approved for the treatment of colorectal cancer back in 2004 and since then, it has received repeated FDA approvals for other types of cancers.

Although the agent is approved outside the United States for breast cancer, in the US, its approval (granted in 2008) has been revoked. The agency reviewed data that showed that the benefits Avastin in the treatment of breast cancer didn’t outweigh the risks of taking it.

There are still clinical investigations underway meant to evaluate Avastin’s efficacy in breast cancers, ovarian cancers as well as melanoma or neuroblastoma.