You are here: Home / Archives for Sony FDR-AX33 Handycam 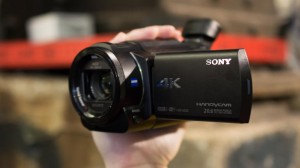 The most talked-about tech event of the year was the 2015 CES held in Las Vegas, where all the tech giant companies presented their latest products. One of those companies was Sony, which revealed what they called “the most compact 4K Handycam” ever released by them. The new recording device is called Sony FDR-AX33 Handycam and it made a good first impression because of its size and weight. … END_OF_DOCUMENT_TOKEN_TO_BE_REPLACED