You are here: Home / Archives for Schrodinger’s box 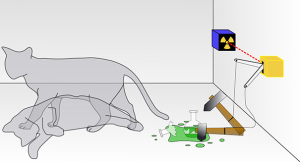 Physicist,Erwin Schrödinger proposed the idea of Schrödinger's Cat in 1935. Schrödinger's cat is a prominent explanation of the superposition principle in quantum theory.The cat is in a superposition of states where it is both dead and alive. The cat illustrates a quantum wave function in which it expresses all motion in the form of a series of probabilities, the scientists explain. To know … END_OF_DOCUMENT_TOKEN_TO_BE_REPLACED